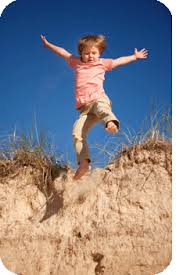 We at Cheeky Cherubs Early Years Schools encourage risky play. It is a natural part of play and the children often seek it out themselves. Climbing, sliding, cycling, balancing and jumping from heights can be considered as risky. It is important that we are aware of the importance of letting the children figure out and decide what they are comfortable with, with our support. It gives children the opportunity to access risks and manage situations.

Even very young children are taking risks, which in turn leads to new learning experiences, such as walking, running, climbing and riding a bike. Each of these activities involves some risks but they are necessary for the development of children.

Below is an interesting article from the Irish Examiner on Bear Grylls explaining why he thinks it’s important to be teaching survival skills, even at a young age.

Bear Grylls: Parents do kids a disservice not exposing them to risks

Parents do their children a “disservice” by not exposing them to risk, TV adventurer Bear Grylls has said.

The father of three said the school curriculum should be overhauled, with survival skills such as lighting a fire and tying a knot replacing maths.

He told the Radio Times that, while he did not want to “bring up Rambo”, his six-year-old son had already learnt how to handle a knife. He said for children to achieve “anything in life” they have to be taught “how to embrace and manage risk”.

The 39-year-old added: “If you try to negate risk in children’s lives, you do them a disservice, because you teach them not to be afraid of risk.”

He added: “There is risk everywhere, even when you go out on the street.

“So if you teach kids to dodge risk, you totally disempower them.

“You empower kids by teaching them how to do something dangerous, but how to do it safely.”

Grylls, who was educated at Eton, said: “If I had to write the education curriculum for every kid in this country, it wouldn’t be Latin and maths.

“It would be… how to light a fire, tie a knot, use a penknife, build a raft, get on with people, eat healthily, keep fit, be part of a team and learn effective leadership.

“And that’s it…. It’s a shame that, as a society, so many have lost these skills.”

Grylls, who takes 13 men out to a desert island to fend for themselves in his new Channel 4 show, said that it was “part of being a dad” to teach his three sons how to make a catapult, tie a knot, and improvise a kite, and that the children set up “search and rescue” scenarios at home.

He added that while his six-year-old son had one accident with his knife, where he ended up “with blood pouring everywhere”, he had not cut himself again

“The scope of activities and the structure of the day and week is very impressive. The school is also kept very clean and maintained to a high standard, which is important for the children’s safety and comfort. We would highly recommend the school to other parents.”